Buckwheat noodles in a rich broth isn't very traditional but it's amazing. 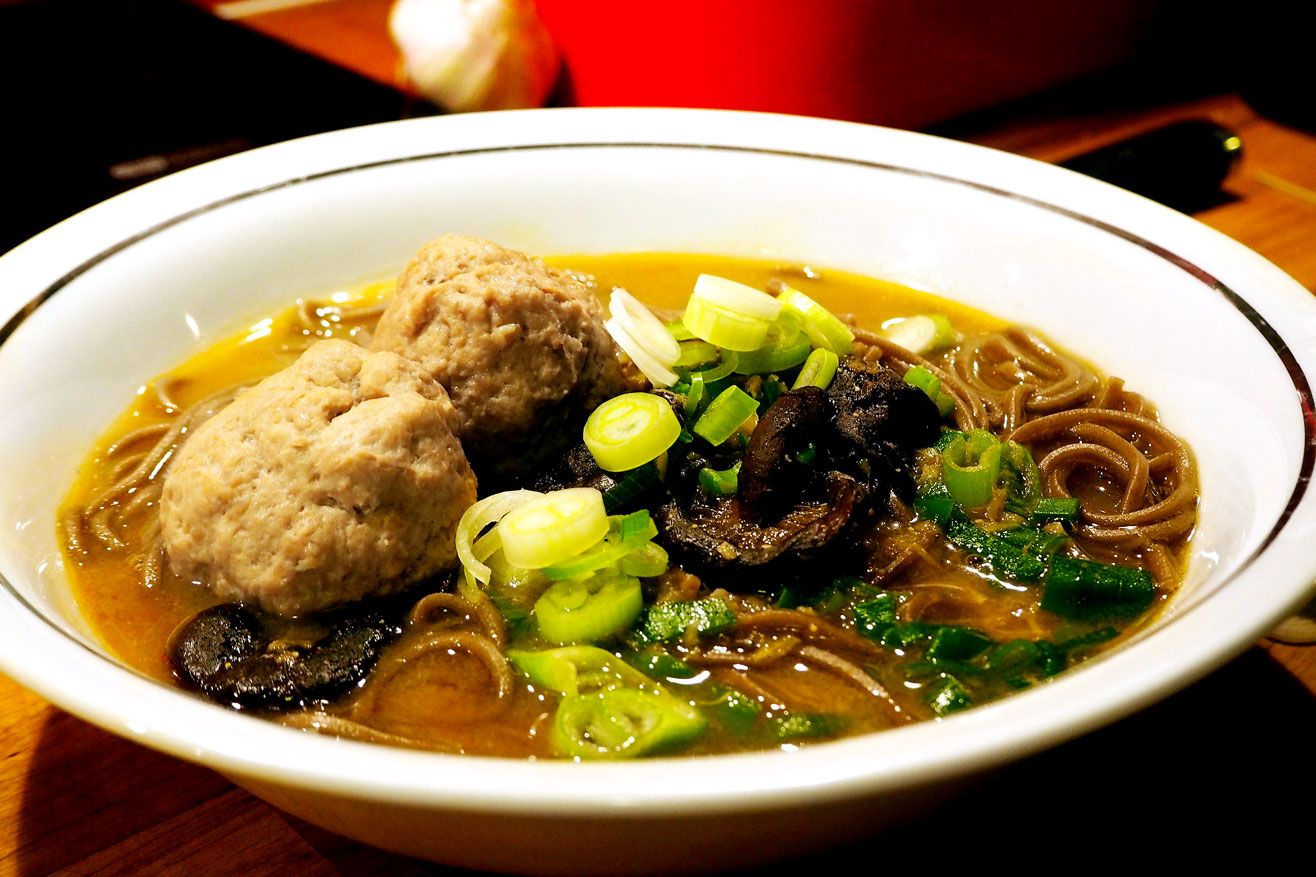 Saying you love asian food, is like saying you like European food. What does that even mean, right? Well, I’ll tell you what it means. It means I like the ingredients that are common in many East and Southeast asian regions, those include rice, ginger, garlic, sesame seeds, chilies, dried onions, soy and tofu. And I love the cooking methods, if done well, such as stir frying, steaming and deep frying. Especially steaming. I like the idea of steaming dough, like those Chinese meat-filled buns called baozi. I like how meat is prepared, like drying a duck’s skin before roasting the bird to perfection.

And just like in Europe, exchanges of knowledge between different cultures and cuisines, has resulted in lots of new interpretations of asian classics. And of fusions between different asian dishes, as well as between western and asian cooking. During my trip to China, I noticed that they love western food in general, none the least burgers, but they don’t really merge it with their own food. The Japanese on the other hand, have evolved their traditional dishes. It’s not uncommon to see sushi with mayo and other California style sushi combinations. The French potato croquette is very popular in Japan, and is sold as korokke (コロッケ). You’ll find noodle soups with korokke on top.

With all this having been said, let’s cut to the chase. I wanted to make my own chicken stock and serve it with Japanese buckwheat noodles, called soba. I wanted to include yellow miso paste, made from fermented soy beans. And I wanted to add sesame flavored minced chicken meatballs. Kind of like the Lion’s head (not really a head of a lion) dish popular in Shanghai. It turned out amazingly good!

And I’m normally quite specific when it comes to grams and milliliters, but this time I want you to follow your gut a little more. You might not find the exact same yellow miso paste as I, perhaps yours is a little less salty or a little milder? Then add some more. Perhaps you don’t have a pressure cooker, well then keep boiling the stock until you cant lift the chicken carcass out without it falling apart. Once you have the chicken stock, there aren’t many steps involved in the making. So have faith in yourself!

The recipe yields 4 normal portions or 2-3 really large portions. You’d be surprised how big the bowls of soba soup are in Japan.

The stock itself, is about 6 liters of which two are used for the soup. The rest can be frozen and used later.

You should really do the stock yourself. Using stock cubes results in a salty broth that isn’t really that good. You can find fresh, ready made broth in some stores. If you really don’t want to make one yourself, at least make sure you get one with no salt added. The yellow miso paste is already salty enough, that you’ll end up with a way too salty dish if you’re not careful.

* If you don’t have a pressure cooker, that’s fine, you’ll just have to cook the stock for much longer.

** If you don’t have one, I recommend you do this recipe for tonight, and save the carcass for tomorrow’s soba dinner.

*** If you turn it down too much, the cooker will no longer make sounds from steam blowing out. If that’s the case, turn the stove back up to maximum, wait until the steam makes its loud noises, then turn down to a little more heat than last time.