Unless you want a completely different recipe 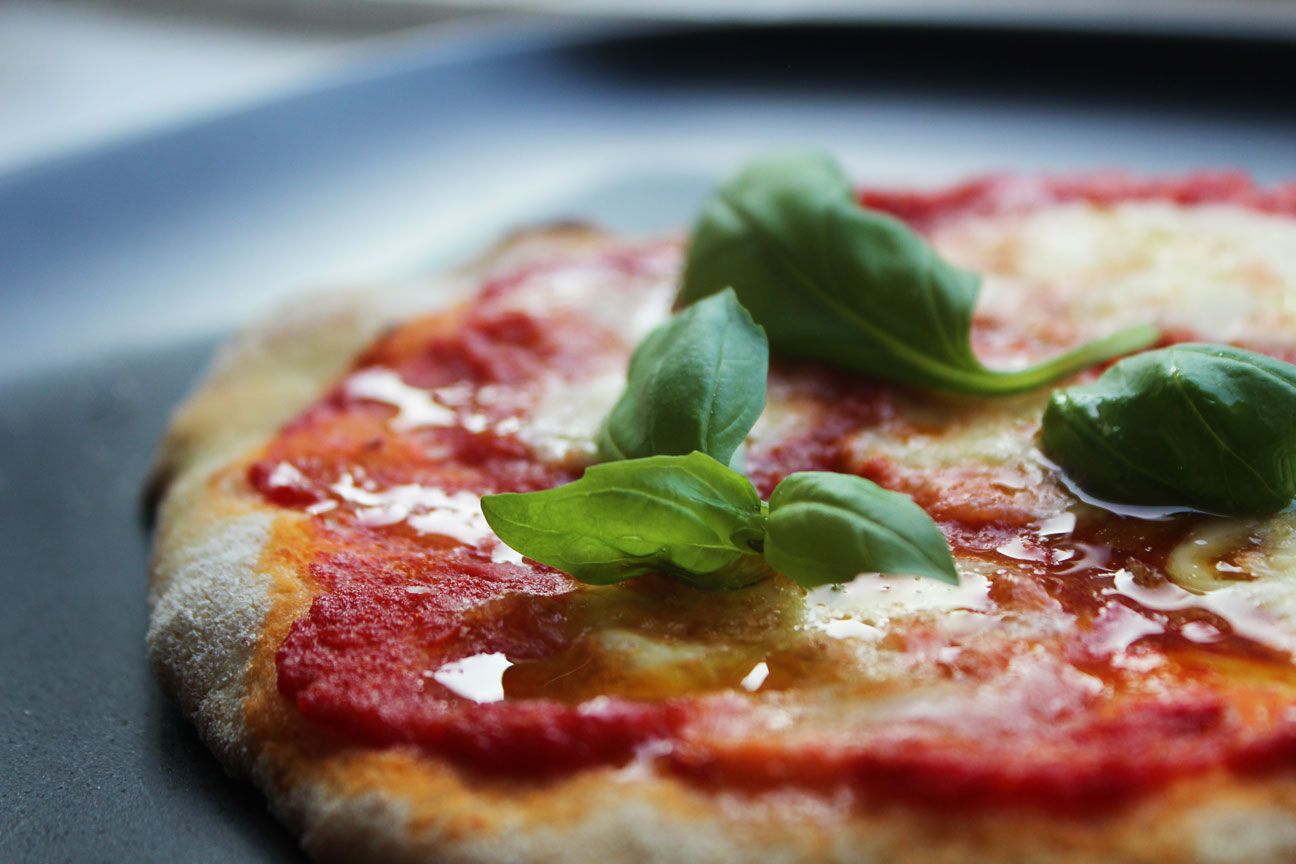 The romans used to eat a dish called placenta, a flat bread with cheese and honey on top, flavored with bay leaves. Much like some varieties of the Indian naan bread. Today, pizza is eaten all around the world, and its varieties are vast. The American style pizza recipe often refers to a pizza with a thick crust. In north of Europe, the thick pizza is often referred to as a “pan pizza”, even though cooking a pizza in a round pan is rather a “Chicago style” pizza, if you ask Americans.

When the Americans want a thin crust, they say “Italian style crust” or specify that they want a “thin crust”. However, the very thin crust on an “Italian style pizza”, isn’t really what you’ll get if you go to Naples and order a pizza from one of the many historical pizzerias. They’re often quite “puffy”. And if you go to a random pizzeria in Italy, you’ll often find squared slices, from a whole pizza made in a pan, “pizza al taglio”. A pan pizza, if you will. The most basic Italian variety, is the Margarita, topped with tomatoes, mozzarella cheese and basil. It’s my favorite pizza recipe, but everyone has their own preferences.

If you ever go to Sweden, you’ll notice that the list of pizza names is very, very long. Hawaii, capriccios, and what not. The Marinara in Sweden, for some reason, is covered in shrimp and clam. In other words, far from what a marinara is in Italy; a bread flavored with sund dried tomatoes and olive oil. No cheese in the traditional pizza sense. A very common Swedish pizza is the “kebabpizza”, a pizza topped with döner kebab meat, and dairy based garlic dressing. It’s not as bad as it sounds, kind of like a flat döner kebab with cheese. What is as bad as it sounds, however, is the Swedish pizza with chicken, curry and banana on it.  You’ll find it in any random pizzeria in Sweden, often under the name “kycklingpizza“, which simply means “chicken pizza”.

Let me quote Wikipedia: “A popular contemporary legend holds that the archetypal pizza, Pizza Margherita, was invented in 1889, when the Royal Palace of Capodimonte commissioned the Neapolitan pizzaiolo (pizza maker) Raffaele Esposito to create a pizza in honor of the visiting Queen Margherita. Of the three different pizzas he created, the Queen strongly preferred a pie swathed in the colors of the Italian flag: red (tomato), green (basil), and white (mozzarella). Supposedly, this kind of pizza was then named after the Queen as ‘Pizza Margherita’, although recent research casts doubt on this legend.“

Legend or not, I’ve taken the best from all pizza recipes I’ve tried, and combined them into one. The dough is heavily inspired by the British cook Heston Blumenthal’s recipe, where he lets a pre-dough “over-leaven”, so that its growth capability is killed, but its flavor is full of yeasty tones, and an almost sour-dough like fragrance. This pre-dough is then combined with a fresh dough, that gives the pizza the chewiness and crunchiness we all expect, and that makes it rise in the oven. This pizza recipe can also be used as a base to make the delicious French pissaladière.

As for the tomato sauce, I use a anchovy or sardine paste. It’s a common ingredient in the Italian kitchen to enrich stews and sauces. It’s salty, and packed with umami flavors. Don’t worry, the tomato sauce won’t have a taste of fish. Just don’t put in too much.

Start with a finely ground wheat flour (called tipo 00 in Italy), and make sure it has a high protein count (12% is lovely).

You need to start working on this pizza recipe 48 hours before you plan to treat your friends with home made pizza. It yields about 8 small pizzas, or 4 medium ones.

Day 1 you’ll do this

Day 2 of the pizza recipe, you’ll do this

* The osmosis (you know, the effect that makes flours and trees “suck up” water) will make sure the water spreads throughout the dough.

** Yes, the anchovy paste is important, it takes the sauce to a whole other level. It’s salty and packed with umami. Wonderful!