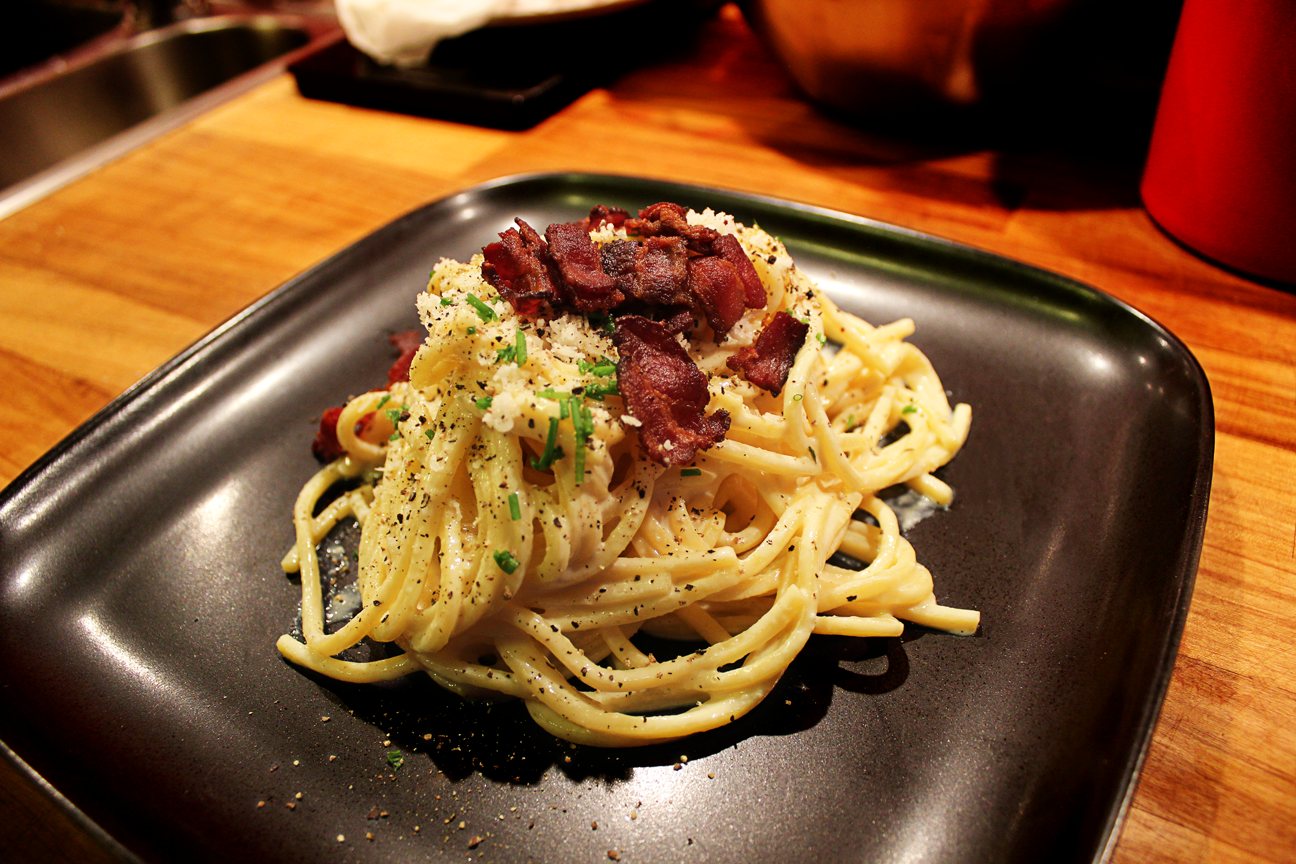 A classic carbonara is simply pasta mixed with fried guanciale or pancetta, together with its fat, raw eggs and pecorino cheese. The name is derived from carbonaro, which means charcoal burner. I read that the dish got its name from being popular among Italian charcoal workers. I don’t know if there’s any truth to the etymology of the name though.

The dish doesn’t have a tradition stretching back hundreds of years, it was invented in the 1950’s, so you’re not breaking any great grandparent’s hearts by improving it. I know Italians are very traditional when it comes to food. One of the world’s best chefs, Massimo Bottura, said in an interview that locals didn’t appreciate his modern interpretation of Italian dishes. It wasn’t until he was internationally acclaimed that Italians too started to at least accept him as a master of cooking. I’m no Massimo Bottura, but I like cooking as a hobby and I like to evolve recipes. This is my take on the pasta alla carbonara.

I love of the variation of carbonara most commonly found outside of Italy. If you ask a Swede or an American what a carbonara is, they’ll likely describe it as a cream sauce. That’s interesting, considering that cream isn’t an ingredient in the recipe being served in its country of origin. Also, I like using butter in my carbonara to get a buttery flavor. Although Italians sometimes use butter, it’s quite uncommon for this pasta dish. I also like a touch of sweetness from caramelized onions, that go really well with the salty bacon/pancetta. Wait, onions in a carbonara?! I could tell you about the aromatic compounds that develop when caramelizing onions (e.g disulfides, mercaptans, thiopenes, trisulfides), and I could tell you how well the flavor goes with the rest of the dish, but in the end, you should really try it out for yourself. I’m confident you’ll love it.

Instructions for the “carbonara” sauce:

* It’s traditionally said that the difference between bacon and pancetta is that one is cured and smoked while the other is just cured, but that’s not true, since you’ll often find smoked pancetta in Italy.

**  Because it’s the temperature where the yolk coagulates.

*** I use olive oil not because it keeps the pasta from sticking (if you have a lot of water and boil furiously, it doesn’t stick anyway) but because the oil prevents white foam from rising up and over the edge.

**** Normally, I would never ask you to pass the pasta under cold water, the starch filled water should be part of a good pasta sauce. But in this case, we don’t want the water nor do we want hot pasta. You see, the heat will screw up the sauce. Indeed, if you put steaming hot pasta into the carbonara, the sauce will reach the point where the yolks coagulate and we definitely do not want that.